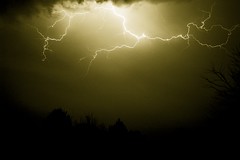 Last week, a very powerful storm passed right over my house at 60mph. I knew the weather was going to be bad, but I didn’t expect a spectacular light show. After staring at the huge bursts of lightning for 5 minutes or so, I realized that I should probably snap a few pictures. So I grabbed my camera, slapped it on my tripod, ventured out to my back deck and proceeded to snap off 258 pictures.

The beauty of digital photography is that there is virtually no cost difference between shooting 10 pictures as there is with shooting 1000 pictures granted you have the memory cards to hold those pictures. Simply shoot to your heart’s content and then edit them later.

Now, I don’t normally shoot lightnlng, so it took a couple of tries before I got an exposure that I was happy with, but once I got things set up (ISO 640, 1.6 seconds, f/5.6, 17mm lens) I simply took as many shots as I could as fast as I could for as long as my finger would allow me to. In between some of the shots, I would double-check my exposure and change things up a wee bit, but for the most part, I was just trying to catch the lightning — which is not so easy.

Of the 258 pictures that I took, less than a hundred had any brightness at all. Less than 50 had any resemblence of lightning, and only about 15 had a decent amount of lightning. Of the 15 with decent lightning, I found 2 that I really like and a handful more that I deem workable.

If I were a gambling man, I wouldn’t feel comfortable putting money on my ability to produce a high percentage of fabulous lightning shots from one thunder storm, but thankfully, I don’t have to be. It doesn’t matter how many pictures you take before you get one that you like, it’s that you took a picture that you’re happy with — so keep on shooting.